Every night is story time at the Marshall house.  Bed time is not complete unless there is a book read before sending the kids off to dreamland.  Over the past eight years we have accumulated quite a collection and we are all pleasantly surprised when we discover one that we have never read or have not read in several months.  Last night was one of those occassions.

I pulled Jamberry off the shelf and story time was on.  Ashton was completely enthralled with the story.  The pictures.  Every detail was like uncovering a hidden treasure.

The synopsis of this book is that there is a land that is filled with berries of all kinds.  In this place of fruity grandeur, there are blueberry waterfalls, raspberry skating rinks, strawberry waters and blackberries that fall from the sky.  Definitely the land of plenty.  The most interesting part of the book is the post word from the author.  Bruce Degen wrote this book based on the magical experiences he had berry picking with his grandparents.  Beyond the berry picking and the preserves and baked goods that were made as a result, there was a bond that Degen formed with his grandparents.  One that carried over to his adult life and he funneled these traditions into the lives of his children.

The tears started to flow from my eyes.  I was immediately transported to my relationship with my Granddad.  It's amazing how something as lighthearted and simple as a children's book can bring you face to face with fond memories of your own childhood.  I vividly remember picking berries with Granddad.  I had the privilege to spend 33 years getting to know him.  Enjoying his companionship.  Forming an unbreakable bond.  It's hard to let that go.  But, I will always treasure the memories. 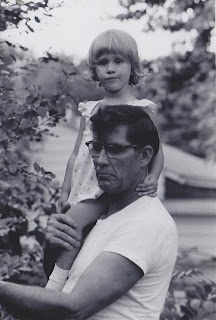 We all know the definition of insanity. Yet, we are destined to do insane things. At least I am.

As many recall the unfortunate stories of the fish in this house, you may also remember my great hesitation in allowing such tiny annoyances creep into my living space. Likewise, the foresight in knowing that such worthless house pets would bring much drama. But, little did I know that the havoc that was wreaked would not deter the kids from wanting another fish. Stay tuned for the insanity...

Since Sidney's fish met it's fate via the garbage disposal in a routine cleaning exercise, we told her she could get a new one after we returned from our trip to my Dad's. Who's brilliant idea was that?   The logical response to dead fish #4, should have been more along the lines of, "Sidney, we do a really crappy job of keeping fish alive in the house. Let's try a plant.". But, no. As a parent seeing their child in pain and on the verge of an emotional meltdown, you just want the bleeding to stop. To do that you plug the hole. You say yes to fish #5, knowing darn well that this outcome will be no different than the rest. Imminent death.

Fish 5, also known as Sponge Bob, is a Betta Fish. Betta Fish are fairly boring. Very creepy. Rather temperamental.  A great addition to this household, right?  Yea, not so much.  The color is already draining from this fish.  It has several white spots on it.  I give it three weeks, tops.

The moral of the story is, we need to start evaluating the Chia Pet as a viable option for a household pet in this family!
Posted by Lisa at 9:51 PM 0 comments

Rest, sleep and relaxation seems to be something that I never get enough of...much like most people.  I found it to be particularly interesting that Sunday's message at church was entirely about rest.  And, it's importance.

Most folks know (religious or not) that there is a day of rest that should be observed during the week.  Typically, for Christian based religions, this day of rest is thought to be Sunday.  And, generally speaking few do it.  I'm certainly a guilty party.

The overarching theme of the "rest message" was that there should be one day out of the week or time each day that is set aside for rest.  There was a particular saying that struck a chord with me, "If you do not rest in life, you'll have no 'rest of life'."  I've swirled that around my head a few times in the past 24 hours.  My conclusion:  isn't that the truth?

More often than not, the days (and nights) are jam-packed with "stuff" and there is no time for rest.  Not mentally.  Not emotionally.  Not physically.  I have my fair share of days, walking around as a ticking time bomb without stopping to think why.  ....my fuse is short, my capacity is limited and I'm sucked dry.

It's time to work rest into the schedule, I suppose.  I'll be sure to set a calendar reminder for it as well!
Posted by Lisa at 9:00 PM 0 comments

Typically a new beginning is indicative of something ending.  Today marks an ending for me - professionally speaking.  I am moving on from my current career and company after four years of employment.

My four years have brought more than just employment.  I created some very tight friendships.  Learned more than I ever thought possible.  Became involved in organizations that I had never heard of, but now, cannot imagine not being a part of them.  Leaned on my colleagues for personal support.  Provided support.  Had some interesting conversations - particularly those that were a part of a Monday morning production meeting.  Quickly learned that there is a reason (and a very good one) to have alcohol on the premises at work.  Teamed with a group of great minds to produce clever ideas.  Became a part of the solution.  Learned to speak "engineer."  Mastered international calling.  Interpreted international English.  Realized that clients are incredible educators.  Understood the value of paper trails - or in this day & age - email threads.   Helped perpetuate the idea that comedy is the tie that binds...and not to skimp on it, no matter the circumstance.  Appreciated the daily lesson of patience being a virtue, and it is not one of my strengths.

I have gleaned much from this experience.  And, while it's a chapter that's closing, it has set the stage for another chapter to open.  I look fondly on my past four years and look to the future with great excitement.

Cheers to my colleagues and friends! 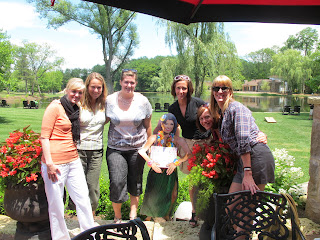 Ashton on me "smashing" Aaron...
Aaron:  "Mommy smashed me...she made me Flat Stanley."
Ashton:  "More like FAT Stanley."
...the brutality in this house abounds...

Sidney on my tan...
Sidney:  "Mom, your arms are peeling.  It looks a lot like leprosy."
Me:  "Thanks, Sidney, but it's NOT leprosy!"
...this coming from the child who told me I was fat on the day I brought Ashton home from the hospital....
Posted by Lisa at 9:53 PM 0 comments

Email ThisBlogThis!Share to TwitterShare to FacebookShare to Pinterest
Labels: Kids

A Picture is Worth a Thousand Words 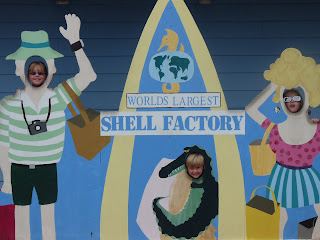 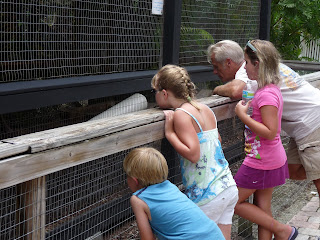 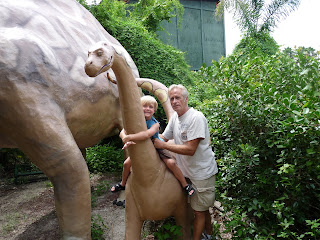 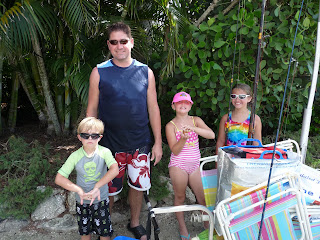 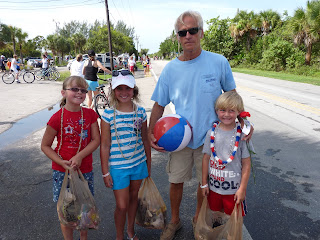 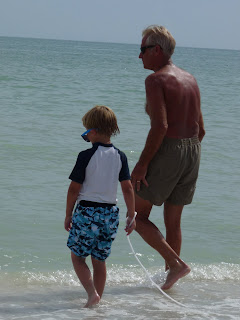 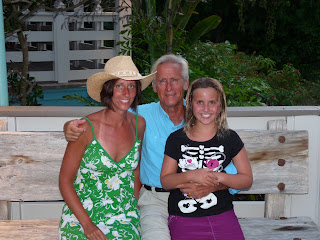 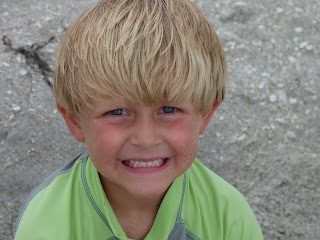 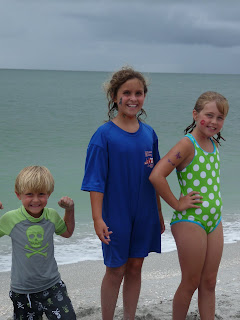 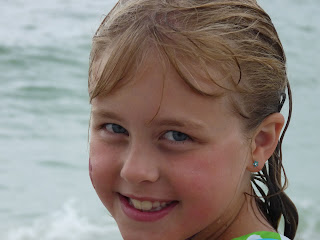 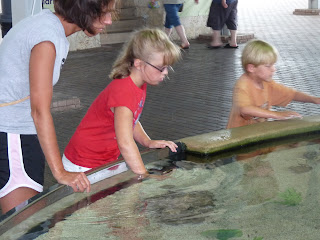 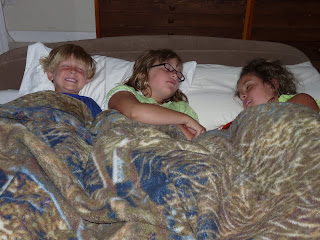 Email ThisBlogThis!Share to TwitterShare to FacebookShare to Pinterest
Labels: Kids

We just returned from a week long vacation in the magical place of Sanibel Island.  Sand, sun, warm air, island time and family made this trip a memorable one.

One evening we went to dinner at a restaurant called Traders.  This restaurant is one of the more upscale places on the island and has a boutique attached to it.  Outside of the incredible meal, I had a fun shopping experience.  There were many eye catching pieces in this fine establishment.  Crystals.  Jewelry.  Scarves.  Island wares.  Hats.

My hands landed on a hat.  A straw hat that was calling my name.  Typically I'm not one for wearing hats - unless they are baseball hats - so how and why I was so drawn to this one was beyond me.  I put it on and it just seemed like it was made for me.  It fit like a glove and I wasn't leaving the store without it.

As I was checking out, Sidney was trying to get me to buy her whatever was sitting on the counter.  Sorry about your luck, Sidney, but this shopping excursion is all about me.  (actually, it's rare that I buy much for myself that is considered to be "frivolous".)  The lady at the register asked me if I would like my hat in the bag or if I preferred to wear it out of the store.  "I think I'll wear it out...that's the whole reason I bought it, right?"  I plopped it on my head and stuffed my credit card in my purse.  When I looked up she looked at me and said, "You look great in that hat.  Wear it in good health."  Of course I said thank you and headed out the door.

That saying stuck with me, however.  "Wear it in good health."  Isn't that the truth?  Life is short...live it to the fullest.  Buy the hat and wear it...don't let it sit on a shelf.  We only go around once! 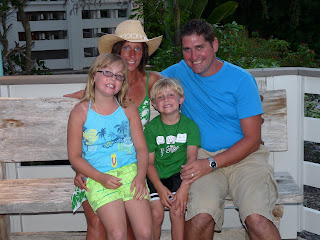